Change is now. And the contemporary artistic movement is “Street Art”. Through innovation and hybrid forms of popular expression “Street Art” is transforming local environments into vibrant urban living spaces. It is a new voice, an avant-garde art explosion that explores new proportions, new techniques, new materials, and new platforms—and is propelling into style a powerful new social activism by connecting with a more diversified public. “Street Art” is also expanding and enhancing the traditional art market, creating an exciting alternative to the prevailing world of gallery/museum art. I completed a large, invitational Street Art mural in Brooklyn, New York, the city’s capital of Street Art and this experience inticed me to research this challenging new expression so rich in potential.

“And then there was light”. Originating from a compact obscurity the Snippets represent little particles of light, colorful bits of galactic history.
The Snippets in Moontime series represents prisms of the rainbow in folly quivering their unknown secrets. Repetitive circles and black matter created by many layers of liquide tar, polymere resin, ashes, paints and gold leaf weave unusual tactile planes. Moon light reflects from the depth of vast darkness. Here there is little color, an attempt to describe deep and timeless space. Full of joyful light and profond shadows this work fabricates it’s own mystery.

In my Moontime series repetitive circles and black matter evoke timelessness and space. The synthesis of many layers of liquid tar, polymer resin, ashes, paints and gold leaf creates abstract, mirrored, and unusual tactile planes. These complicated surfaces seem to fabricate their own mystery and combine with the circles to represent the complexity, the harmony and the cyclical nature of our universe. They invite contemplation on its infinite vastness.
Also included here are photographs of found pieces of metal from the French countryside. They are altered and then assembled with the plexiglass to transition from abandoned trash to a nobler form.

In these turbulent times, the artist is obliged to consider questions of self-concept within a period of dynamic cultural change. My recent paintings research the notion of personal identity. Identity is one of the factors which shapes society and its art, an integral part of wo/man’s common humanity.
My paintings are expressions of the fluid yet universal experiences of wo/man today. They are a mixture of classical and contemporary techniques, a combination of suggested forms and layered colors on treated canvas. Each painting is liquid thought speaking not of what one sees but of the emotions one feels. 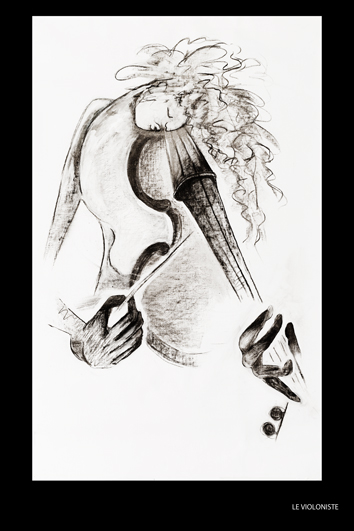